As a sign of good will and cementing cooperation, China has offered Rwanda to construct a $37 million modern 5-storey complex as the office for the Prime Minister.

Zhang Dejiang, the Chairman of the standing committee of the National People’s Congress of China (NPC), who is in Rwanda for a two-day official visit, cut the ribbon and commissioned the construction of the facility.

Once complete, the building will serve as an Administrative Office Complex for the Prime Minister, other ministries and government institutions.

Zhang Dejiang also met President Paul Kagame during which they discussed how China can support Rwanda to cut the widening trade deficit. China is Rwanda’s key investment and cooperation partner.

China’s investments to Rwanda are more than $200 million, but the country remains the largest source of commodities imports.

In addition, Chinese companies run mega construction and irrigation projects in different parts of the country.

Rwanda’s Foreign Minister Louise Mushikiwabo said the two-day visit by China’s 3rd high ranking official and his delegation that is in the country to strengthen relations between the two countries, including collaboration on global matters.

They also came to follow up on commitments made by China’s president Xi Jinping, including a $60 billion fund, during the China-Africa Summit in Johannesburg last December.

The fund will serve as a window to access grants, zero interest loans, concessional loans, export credit lines a financial support to SMEs. Before Zhang met with Speaker Donatille Mukabalisa for a closed-door meeting he visited the Kigali Genocide Memorial Centre in Gisozi, where he observed a minute of silence and laid a wreath in honour of victims of the 1994 Genocide against the Tutsi. 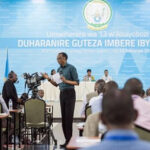 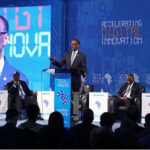 The President of the Republic of Rwanda, H.E. Paul Kagame has stressed that dealing with the continued threat of ex-FAR/Interahamwe in the Democratic Republic of […]

From Lake Kivu region, Rwanda’s aromatic Arabica coffee has made it to the shelves of Nespresso, the world’s  pioneer and reference for highest quality portioned […]