There have been more efforts invested in order to remember and respect the Tutsi genocide victims in Gisagara district, whereas new memorial sites have been built so that the victims’ bodies are buried in honour.

Gisagara district leadership promises to continue paying tribute to the 1994 Tutsi genocide victims that were killed in this district. After Kabuye and Kibirizi memorial sites, Kansi memorial site have been built and was opened on July 09 2011.

Kansi sector residents express their gratitude for having given a place to remember their loved ones who passed away during the genocide unlike before when they could feel their departed relatives were not honoured.

Gisagara district leadership says it’s doing what it can in building memorial sites so that genocide victims that were not buried respectfully are done so. 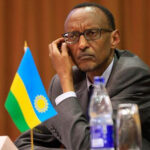 Burera district administration has decided to support the 1994 genocide against Tutsi survivors from in different things so as to comfort them; Samuel Sembagare the […]

Rwanda is scaling up efforts to exploit the vast peat reserves and generate electricity much needed to meet its energy demand. With recent success on […]

Rwanda has proposed the world’s first country-wide DNA database, a project that will involve collecting samples from all of the country’s 12 million citizens in […]