In a post on twitter, Kagame, a self-confessed Arsenal fan, congratulated the team for a well-deserved win but also urged the players to aim at much bigger things going forward. Arsenal’s win 23 minutes from time earned Mikel Arteta silverware in his first season as boss at the London club.

Arsenal have been advertising “Visit Rwanda” on players’ sleeves for the past two years following a 3-year deal worth £30 million (€34 million) that was signed between Kigali and the london club.

Despite initial criticism over Rwanda’s massive investment in a football club, the deal appears to be bearing fruit.

According to Rwanda Development Board-RDB, the number of tourists from England alone has risen by 5% compared to the previous period.

“Before the partnership was signed, 71% of the millions of Arsenal fans worldwide did not consider Rwanda a tourist destination, at the end of the first year of the partnership, half of them considered Rwanda a destination to visit,” Belise Kariza, head of RDB’s tourism department said last year.

She said then, that the overall value of the partnership, based on TV viewership and social media, is estimated at €36 million euros according to statistics by Nielsen, Blinkfire Analytics and research agency Hall and Partners. 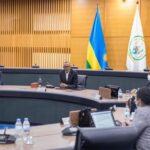 The 9th East African military games have successfully concluded at the Nelson Mandela stadium, Namboole in Kampala on Wednesday. Rwanda won three of the five […]